The Emerald Isle is known for its glorious, green landscapes and lush, verdant scenery. Tucked amongst the mountains, forests and countryside is an array of spectacular waterfalls.

Those lush, green landscapes are so verdant because Ireland is one of the wettest places in Europe. While the rainfall might be inconvenient for hikers, it’s what makes the island such a scenic place and, besides, all that water also makes for some impressive waterfalls. Combine that with the rocky, craggy, mountainous terrain, and you have the perfect ingredients for some excellent waterfall chasing.

From dramatic and remote waterfalls in the Irish mountains to charmingly quaint waterfalls hidden away in the forests close to cities, here are 19 of the best waterfalls in Ireland. If anything we say inspires you to travel with Overland Ireland, consider our Small Group Tours of Ireland and our Self Drive Tours of Ireland. And if you have any questions, please just get in touch. 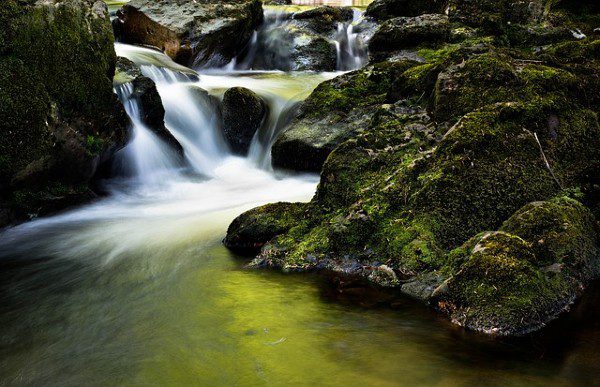 Torc Waterfall is one of the most famous waterfalls in Ireland, and also one of the most visited. Located just outside of Killarney within Killarney National Park, the waterfall has been attracting tourists since the Victorian era, when travellers began to appreciate the beauty that was waiting for them in County Kerry.

The waterfall forms part of the extensive Ring of Kerry, a tourist trail that takes visitors from Killarney and out to the wild coastline in the southwest of Ireland. Within the Killarney National Park, there’s much to see once you’ve visited the 20-metre high waterfall, including medieval abbeys and serene lakes.

County Leitrim is home to one of Ireland’s most romanticised waterfalls. Glencar Waterfall is located in Glencar Lough, a freshwater lake found in a wide valley topped by tall mountains. The mountains feed the waterfall, which in turn is the source of water for the lake itself, with Glencar Waterfall hidden away at one end of the lough, waiting to be discovered.

A short hike through the woodland will bring you to the waterfall, nestled behind trees and greenery. The waterfall had a dramatic effect on the famous Irish poet William Butler Yeats, who was so stunned by its beauty that one of his iconic poems, which he named The Stolen Child, featured Glencar Waterfall.

While Glencar Waterfall might be the most well-known and visited waterfall around Glencar Lough, just across the county border in County Sligo, you can find the inspiring sight of the Devil’s Chimney.

The waterfall is as dramatic as its name. However it’s not quite as popular as neighbouring Glencar Waterfall because it’s seasonal. The water can dry up in the summer months – which is also peak season in the area – leaving just a cliff face and a trickle.

After heavy rain though, the Devil’s Chimney is a frightening display of the power of nature, as the water rages over the edge of the cliff and falls for 150 metres into the plunge pool far below.

Although the Devil’s Chimney is taller when it’s actually flowing, Powerscourt Waterfall in County Wicklow can claim to be the tallest permanent waterfall in the Republic of Ireland. Powerscourt rises to a mighty height of 121 metres, and it’s there all year round to be gazed at in awe.

The single drop waterfall is a magnificent sight, as the water plummets over the edge of the cliff on the Powerscourt Estate. While here, you can also visit the historic mansion and landscaped gardens, while the waterfall’s proximity to Dublin makes it an easy day trip from the capital. 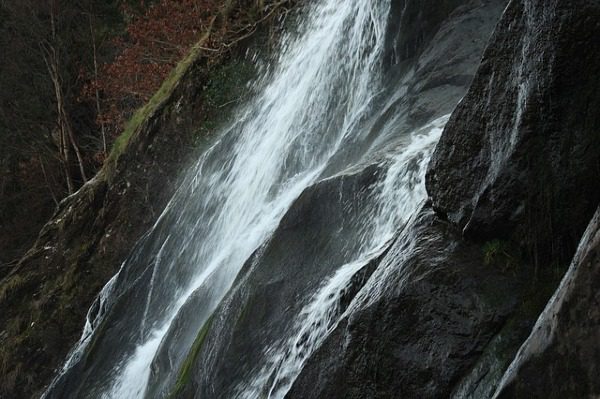 Also located a short journey south of Dublin in County Wicklow is Glenmacnass Waterfall. While it can’t match Powerscourt for height, Glenmacnass isn’t far off, measuring in at a total height of 80 metres.

It’s not exactly small, and it’s found in glorious surroundings within the Glenmacnass Valley. This is excellent hiking territory (read our guide to the best hiking in Ireland), as you walk through the valley and along the Glenmacnass River to see some of the best scenery in the county. The old military road built in the early 19th century by the British also passes through the valley, making it easily accessible from the capital and great for road tripping.

On the far northern coastline of the Republic of Ireland in County Donegal is Glenevin Waterfall. This single drop waterfall is beautiful, as it tumbles over a mossy ledge in the middle of a delightful forest.

This is a quiet place to visit as it’s in a fairly remote part of Ireland, but once you are in County Donegal it’s relatively easy to find the waterfall. A gentle one-kilometre trail leads through charming woodland and along a meandering river until you reach Glenevin Waterfall. You’ll be glad that you journeyed this far north to find it.

Located on the River Annagh right on the border between County Tipperary and County Limerick, Clare Glens has beautiful waterfalls within a picturesque valley that’s home to wonderful hiking and hillwalking and a great number of small waterfalls and rapids.

The Clare Glens Loop walk is the best way to see the valley, as you’re taken along the river passing sandstone rock formations and waterfalls along the way. The total walking distance is around four kilometres, making this a rather gentle hike. 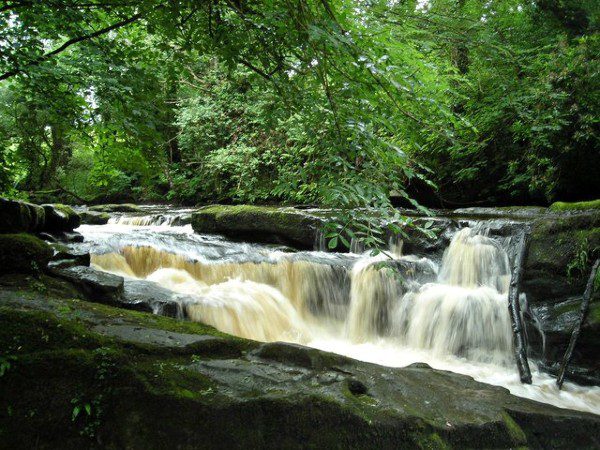 Just outside the small village of Kilfane in County Kilkenny in Ireland’s southeast is the Kilfane Glen, which is home to the picturesque Kilfane Waterfall.

While the term glen might conjure images of wild moors and untamed lands, the Kilfane Glen is actually a perfectly landscaped garden, which is heritage listed and over two centuries old.

The garden was designed during a period of history when romanticism was sweeping across Europe, and it’s every bit as grandiose and lyrical as you could imagine. The waterfall is found tucked away within the gardens and rises to a modest 10 metres in height.

There’s much more to see within Kilfane Glen too, so save plenty of time to explore all the hidden, historical quirks of this beautiful corner of County Kilkenny.

If you’re looking for adventure rather than romanticism, then head to the Mahon Falls in County Waterford. The waterfall is fed from the River Mahon, sourced from the Comeragh Mountains, which you’ll be immersed in when you travel to the falls.

Mahon Falls is a daunting 80 metres tall. A gravel trail leads from the car park into the heart of the mountains. You’ll be walking through a valley, following the River Mahon, until you reach the Mahon Falls themselves.

The trail isn’t too difficult either, being well worn and mostly flat, but the dramatic scenery that surrounds you will make the start quite imposing. It’s an epic walk to the base of an epic waterfall, with a distance of around 10 kilometres to cover.

Gleninchaquin Park in County Kerry is the breathtaking location of the dramatic Gleninchaquin Waterfall. A day at the park will take you back to the Ireland of old, as here you’ll find rolling hills, rocky cliffs and historic stone dwellings.

The waterfall is the highlight of Gleninchaquin Park though, and it’s also central to the beauty of the surrounding landscapes, as it feeds several glorious rivers. There are several walking routes through the area, but it’s difficult to miss the tall waterfall plummeting from the top of the rocks.

Close to the border with Northern Ireland, County Cavan is the home of Tullydermot Falls, a much-undervisited part of the country and a quiet place to explore.

The falls are on the Claddagh River, as it flows down from the Culcaigh Mountains. You can easily walk to Tullydermot from the car park close to Glangevlin road. The falls are beautifully picturesque, with boulders strewn around the plunge pool and trees rising from the cliff top.

The area is also home to a number of other attractions, including caves and historic sights.

County Laois in central Ireland is the scene of the spectacular River Barrow, beautiful woodlands and a multi-tiered waterfall. The Glenbarrow walking route will take you through the best of this outdoor world, as you follow the river for one of Ireland’s best-forested walks.

The highlight of the walk is Glenbarrow Falls, which has three distinct sections along the river. The water tumbles from one drop to the next, creating a marvellous layering of waterfalls, that steadily become more and more powerful as the river is churned into white water. 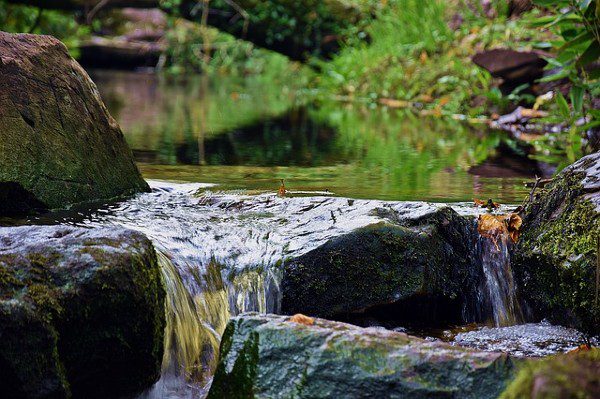 The mighty Assaranca Waterfall is one of the most awe-inducing waterfalls you can visit in Ireland. Located in County Donegal along the Wild Atlantic Way that follows the western coast of the country, Assaranca tumbles down between two hilltops into a huge plunge pool below.

The hills are lush and green after the rain, which is the best time to visit to see the water quite literally crashing over rocks and hurtling towards the reservoir. It’s an incredibly impressive sight to behold, and one of the best examples of the beauty of the Emerald Isle that you’ll find anywhere on the island!

Tourmakeady Waterfall is another spectacular example of Ireland’s natural beauty, although you’ll find that this beauty is exemplified in a much more understated way than other, more powerful or larger waterfalls in the country.

This isn’t the highest or the most ferocious waterfall you can visit in Ireland. In fact, it’s quite small and on its own is rather underwhelming. What makes this waterfall so lovely though is the surrounding scenery, as it’s located in the middle of ancient woodlands.

You walk through the forest surrounded and immersed by trees and foliage for two-and-a-half kilometres before emerging to the delightful view of the Tourmakeady Waterfall at the end of the walk.

By the little-known village of Adrigole on the Beara Peninsula in County Cork is the equally unknown Mare’s Tail Waterfall, which plummets over the intriguingly named Hungry Hill. This is one of Ireland’s tallest waterfalls, but it’s not just the waterfall that makes this such a special place.

In County Mayo, you can find the wide drops of the Aasleagh Falls close to the Atlantic coastline. The falls are found along the wide Erriff River, just before it hits the coast and empties into the harbour.

It’s a popular local photography spot, as the water is churned up by the crashing drop of the falls. But even so, it’s unlikely that the area will be too crowded, as it’s still surprisingly off the beaten track when it comes to Ireland’s waterfalls.

Found on the far northern coastline of Northern Ireland, Dunseverick Falls is one of the most dramatic waterfalls in the north.

The waterfall is found by the village of Dunseverick, which can be incorporated in a trip to the Giant’s Causeway, as it’s close by.

The waterfall is formed as the river hurtles off the edge of the cliff, straight into the ocean below.

Glenariff Forest in Northern Ireland is the site of several different waterfalls, which forms part of a beautiful nature preserve in County Antrim.

The highlight of the forest is the Waterfall Walkway, a hiking trail that takes visitors on a five-kilometre walk past three separate waterfalls on a journey through the best of Glenariff Forest. 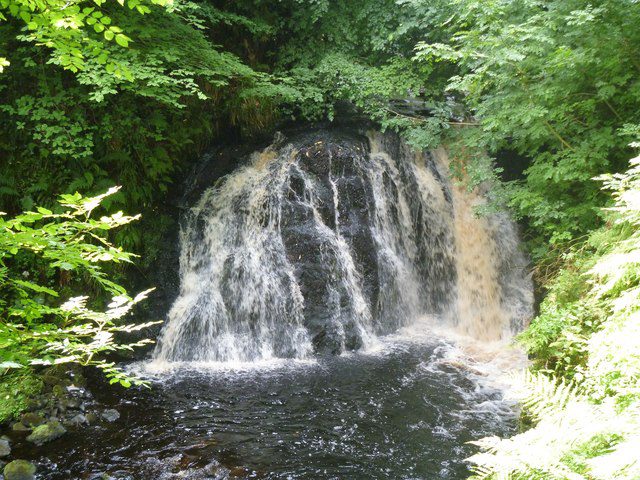 Just north of Belfast and just a short trip from Northern Ireland’s capital is Glenoe Waterfall. Cared for by the National Trust, Glenoe Waterfall sits at the end of a trail that leads from Glenoe village.

It’s a short walk but it’s a great one, as you’ll be immersed in the woodland before the waterfall reveals itself to you through the trees.

If all this talk of famous waterfalls in Ireland has whetted your appetite for a visit to the Emerald Isle, contact Overland Ireland to discuss our superb Ireland tours. As Ireland experts, we’ll show you the best the country has to offer, including its gushing waterfalls. 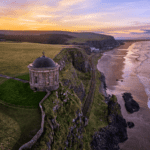 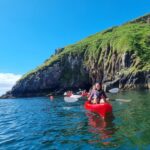 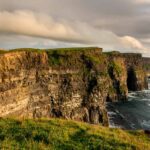 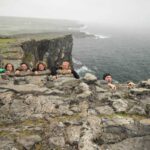