When you book with an account, you will be able to track your payment status, track the confirmation and you can also rate the tour after you finished the tour.
Sign Up

Or Continue As Guest

When you book with an account, you will be able to track your payment status, track the confirmation and you can also rate the tour after you finished the tour.
Sign Up
2457

One of our best Ireland tours!

This is one of our best Irish tours because it manages to fit so much into just 5 days. If you’re only in our beautiful country for a short amount of time, then this Magical South 5-day Tour might be the perfect option for you. As a Jewel Tour, it is designed to move at a smoother pace while allowing you to enjoy some light activity. Your guided tour of Southern Ireland will begin in Dublin’s busy streets; leaving the noise behind, you will embark towards the wonderful Wild Atlantic Way. And if this tour interests you, but you’re looking for something a little longer, then check out our Ireland to island 7-Day Tour (which also visits Skellig Michael). If you’re looking for the trip of a lifetime, check out The Ultimate Ireland 10-Day Tour Package.

Overland Ireland’s expert local guides will ensure you have the best Ireland tour possible, exploring everything from bohemian Galway to the historic Rock of Cashel. There’s good reason we get such high reviews, and we think it comes down to our local guides and how they look after and entertain our guests. You’re here to have the Irish vacation of a lifetime, and we do our best to ensure you get exactly what you want!

This 5-day Ireland tour is absolutely brimming with fun and interesting things to do. Take in the jaw-dropping sights and sounds of the Ring of Kerry, a stunning part of Ireland. You’ll see some amazing gems such as Moll’s Gap, Torc Waterfall, and Killarney National Park. And you’ll even have the opportunity to kayak with Fungie, Dingle’s resident dolphin. You will also visit Ireland’s most famous landmark: The Cliffs of Moher. You’ll stand on the precipice and you’ll feel like you’re at the edge of the world.

Within just 5 days on this unforgettable Overland Ireland tour, we’ll pack in a diverse range of scenery, castles, history, heritage, culture and wildlife, and a few pints of the black stuff too.

So, from seafood to the traditional music, and from Galway to Cork, this Irish tour promises to be utterly unforgettable and we can’t wait to welcome you to our beautiful ancient island. If you have any questions for us about this tour or any of our other Ireland tours, please don’t hesitate to contact us. Start planning you dream Ireland adventure with Overland!

Tours can be operated in reverse and combined with other tours that follow the same route for the best guest experience. 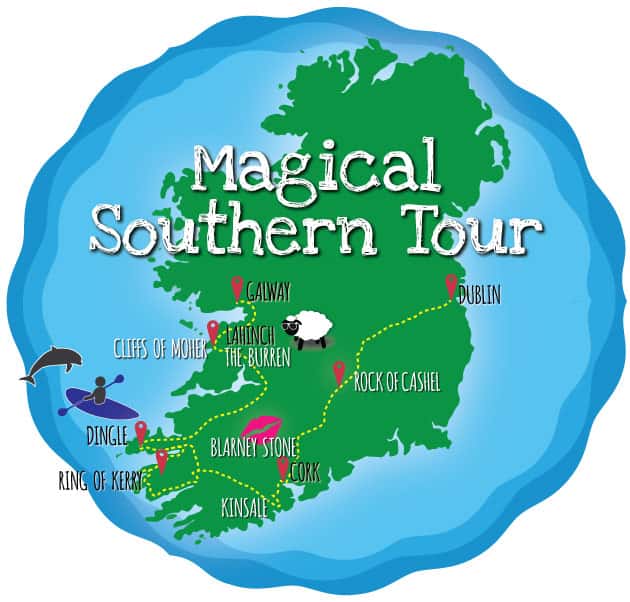 We are one of the only tour companies to include as much as we can into your tour price. So there are no hidden surprises on your tour, and this takes away the hassle about thinking of unexpected charges.

You will notice the list of what’s included is very abundant and covers entrance fees, transport, accommodation and kayaking to name a few!

Our quest is to bring your price down and your tour experience up… to the max!

If you have any special dietary requirements or preferences, please let us know; we can cater this tour to vegans, vegetarians, and pescatarians. It’s also worth noting that all of the fish served to our guests is responsibly sourced and as fresh as it gets! Day 1: FridayGalway to the Cliffs of Moher

This most eclectic of Wild Atlantic Tours begins in Galway, the City of Tribes and home to the famous Claddagh ring where you’ll be taken on an historical walk of the city’s medieval streets.

Experience colourful street performers and a great atmosphere in this famous, bohemian town. Duck in and out of brightly coloured shops, try on Claddagh rings and Galway shawls, pass through The Spanish Arch and hear tales of Gaelic bards and our bloody war of Independence, at the new city museum.

The day just keeps on giving as we travel southwest to The Burren National Park and on to The Cliffs of Moher as the wild Atlantic roars below.

On this adventure, we’ll visit Corcomroe Abbey, a 13th century Cistercian Monastery, the 16th century Dunguaire Castle and have a short stop in the colourful fishing village of Kinvara.

The evening is yours to spend it in Doolin, the hometown of Irish music, where you can listen to the seisún (traditional music) and enjoy the “craic”.

Our guided tour of Ireland continues on the search for some ancient tombs. We’ll take you to a portal tomb at Poulnabrone, the oldest megalithic burial site in Ireland, dating back to 3000BC.

A short journey from the Dolmen, the farmers at Caherconnell will treat you to a spectacular sheep dog trial. Prepared to be awestruck by the skill of the farmer and his furry friend as they gather up their flock of sheep. This is something not to be missed on your tour.

We will leave the west behind for the spectacular southern counties of Kerry and Cork. Next stop is Dingle. Finish off a perfect day at the Dingle Whiskey Distillery. There you will sample their award-winning whiskey and gin and get an education on the history of whiskey production around the world.

This evening is yours to absorb the atmosphere in Dingle’s famous quirky pubs and fantastic restaurants. Why not sit in Foxy John’s hardware store, order yourself a drink and strike up a conversation with a colourful local!

Our morning begins on Dingle Bay where we take our kayaks to visit the town’s biggest celebrity – Fungie the Dolphin and explore the caves in the bay. Alternatively, if kayaking isn’t your thing, we’ll go on a hike up Mount Brandon, where you will be rewarded with 360-degree panoramic views of Dingle Bay and Castlegregory. If you would like a more relaxed start to your day, why not choose a stroll around the town for some retail therapy, a coffee and watch the world go by? It’s your holiday – Do it your way.

After lunch your expert Overland guide will take you on an impressive trip along one of Ireland’s most scenic roads – The Slea Head Drive. If you are lucky enough you might get to meet a couple of our local fluffy friends – baby lambs! We spend another night in the buzzing town of Dingle, so you don’t need to repack your suitcase. Just relax and enjoy.

Say a fond farewell to Dingle and journey towards the Ring of Kerry. Our first stop takes us to Killarney on the Ring of Kerry. We visit parts of this scenic route and you will discover many hidden gems including Moll’s Gap, Torc Waterfall and Ross Castle in Killarney National Park. We will bring you on a tour of Ross Castle where you will learn what life was really like behind the stone walls.

We will stop for some shopping and lunch in the beautiful heritage town of Kenmare. For your last night on tour we are excited to bring you to coastal Kinsale which is famed for its culinary culture, delivered by its many award-winning restaurants. The town also has a great tradition of poetry, silver, gold and glassware manufacturing which can be seen throughout its local shops and galleries – boasting local talented artists.

Wake up refreshed and ready to be taken on a guided walking tour through the narrow streets of Kinsale. Before leaving Cork, (often referred to as Ireland’s REAL capital), we will bring you to Blarney Castle. Nobody should leave Ireland without giving the Blarney stone a big fat kiss! Kissing the Blarney Stone is said to give the kisser the treasured “gift of the gab”. You can let us know if it works!

Our final stop on this small group tour is the Rock of Cashel. The Rock of Cashel is over 1000 years old. You will take in its medieval round tower, chapel, cathedral and castle. A fantastic end to your trip.

Your guided tour of Ireland is coming to an end, but our guides will journey back with you to our bustling capital city, Dublin, armed with recommendations of things to see and do if you have a little time left. Perhaps this is just the perfect opportunity to sit back and soak up all that you have experienced over the last 5 days, in one of our most diverse and jaw dropping Wild Atlantic Tours. 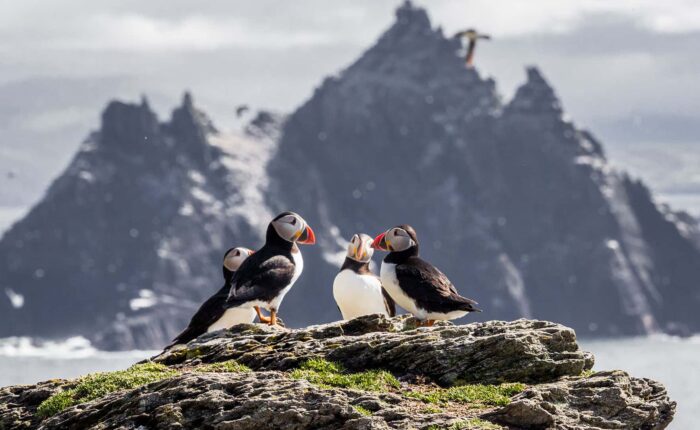 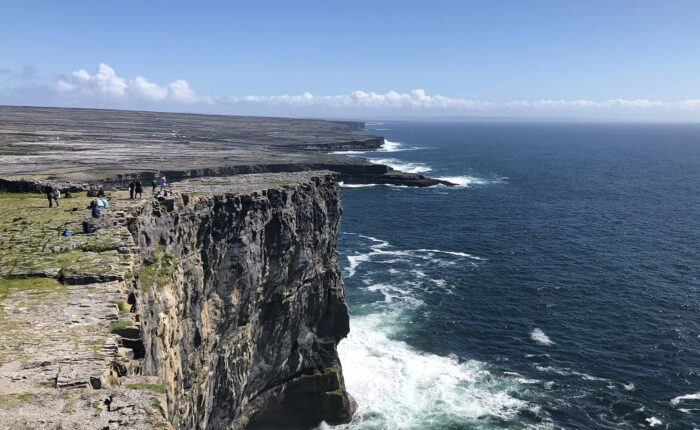